You are here: Home / Featured / Come back to Portofino 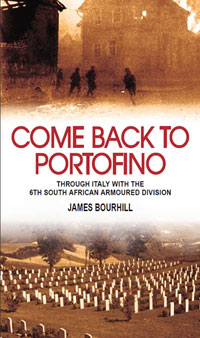 From training camps in Egypt through to the idyllic summer of 1945 the ‘Div’ left its mark on towns and villages across Italy. From Monte Cassino to the outskirts of Venice and Milan, the campaign lasted exactly twelve months. During the advance through Rome up to Florence, it was a case of constant movement and violent contact with the enemy.

Experiences which left an enduring impression on returned soldiers included the periods of rest at Siena and Lucca as well as the four miserable winter months in the northern Apennines. Overall, the casualty rate was surprisingly low considering the ideal ambush country and mountain defences which had to be overcome. In the rifle companies however, the rate of attrition was high and replacements were few. Among the South Africans who are buried in Italy, there are those who died in vehicle accidents, from drowning and falling out of windows or from suicide.

For the ordinary soldier the most important part of everyday life was contact with home or foraging for food and wine, and even enjoying the company of signorine when operations permitted. Nevertheless, it was not one long happy camping trip as was often portrayed in the press. The cast is made up of the famous regiments and ordinary South Africans who participated in these epic events.