You are here: Home / News / Scarlets – The Official History by Alun Gibbard 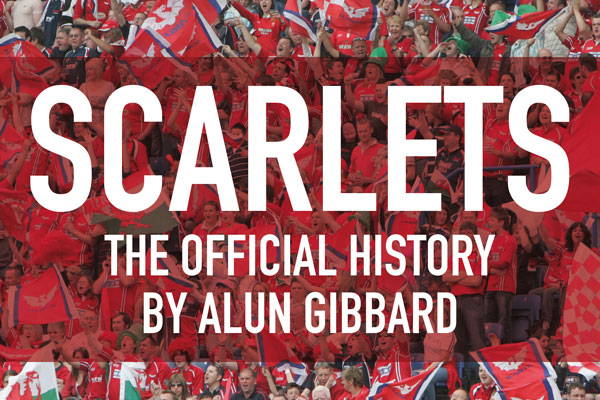 The passion, fervour, joy and pride of an iconic Welsh rugby club and its inextricable links with the local town, are brought strikingly to life in Scarlets, The Official History of the Llanelli Scarlets, written by veteran broadcaster, and lifelong Scarlets fan, Alun Gibbard.

Llanelli is one of the world’s best known rugby towns, and its rugby club could not be more passionately supported.  From the club’s first game in 1876, to beating the All Blacks in 1972, to the present day in a brand new stadium, the book charts the club’s rise to international status.

“For me, it’s about bringing the power and the passion conjured up in the stadium to the page,” says Alun Gibbard.

“The atmosphere at a Scarlets game is like no other.  When the All Blacks were defeated in 1972, some of their players commented on the intensity of the atmosphere, and the intimidating effect that had on them.”

For Gibbard, the social history of the game in Llanelli is hugely important.  The town of Llanelli took the game of rugby away from its traditional public school preserve and made it a working man’s game right from the very first days,  helping to make it a game of the people.

“The match on a Saturday afternoon provided a welcome antidote to the hard grind of working in heavy industry, for fans and players alike.” he adds.

The book tells the stories of some legendary names in Welsh and world rugby: from Albert Jenkins to Phil Bennett, Harry Bowen to Terry Price and RH Williams to Stephen Jones. It also explores how Llanelli carved a place for itself on the international stage.  For example, Gibbard cites how Trevor McDonald of ITN fame, knew of Llanelli when he was a child growing up in the West Indies.

“Llanelli is probably the world’s most famous rugby club, even those not directly involved in rugby have heard of it, and it captures the imagination of people throughout the world,” he says.

Other themes in the book include:

Llanelli in the 1870s – bringing rugby to the people
Sosban Fach – the song that brings tears to grown men
Stradey Park, -the place, the power and the passion
Moscow – travels during the Cold War
Touring teams – heroes in the making

The book also features a host of fascinating black and white and colour photographs.

Peter Gill of Graffeg says: “Llanelli has a special place in the hearts of Welsh people as the club has produced so many of the country’s rugby stars. However, the club has also earned a special place in world rugby.  Alun has put together an unrivalled insight into how this all came about – the people with passion and power who made it happen.”

Alun started his working life with the BBC, where he worked as a reporter and subsequently a producer.  He worked in current affairs and features at HTV, and has also presented and produced magazine and documentary programmes for S4C.

Alun is now a full-time writer, and has published 26 books.

His 2012 book, ‘Who Beat the All Blacks?’ was shortlisted for the British Sports Book Awards 2013.

Scarlets
The Official History by Alun Gibbard
Published by Graffeg, October 2015, Price £20
Available from all good bookshops and online.