You are here: Home / News / Jewish Entrepreneurship In Salonica

Jewish Entrepreneurship In Salonica, 1912-1940: An Ethnic Economy In Transition By Orly C. Meron

In this book the author, Dr Orly C Meron, provides a multidisciplinary exploration of Salonica’s Jewish-owned economy between the years 1912-1940, a period prior to and during Greece’s national consolidation.

Based on original and newly analysed archival materials, she presents the results of her comprehensive, comparative and inter-ethnic study of Jewish entrepreneurial 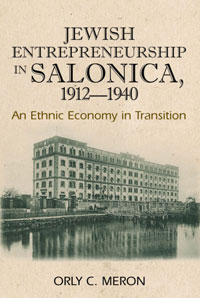 patterns for three distinct historical periods and two levels of analysis. The first pertains to the multi-ethnic business world of Greek Macedonia (1912-1922) after its incorporation into the Greek nation-state; the second refers to the era of minority-majority relations (1923-1930) following radical modification of Salonica’s demographic composition, a process that culminated in the ethnic unification of its business world.

The third includes a sectoral analysis of Jewish entrepreneurial patterns as they developed in response to the local and global economic crisis that raged during the 1930s. The macro analysis combines a comparative static overview of Salonica’s Jewish versus Greek business behaviour together with a dynamic comparative analysis focusing on transitions in Jewish entrepreneurial patterns. The micro analysis delves into features of Salonica’s Jewish business elite: class resources, family and ethnic networks, business strategies and organisational structures. Dr Meron’s research contributes new theoretical insights to the study of ethnic groups in changing environments by applying the ethnic economy approach while crossing the disciplinary boundaries between history, economics, sociology and their related fields. Her study opens a revealing window to the economic and demographic history of the Jewish community of Salonica, the “Jerusalem of the Balkans”, home to the largest concentration of Sephardic Jews before the Holocaust.