You are here: Home / News / Cat Walk for Cat Lovers 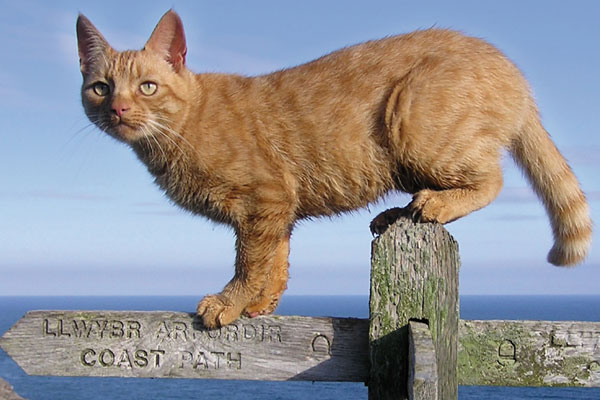 Cat Walk is a must-have publication for all cat and nature lovers.

Internationally renowned illustrator and author,  Jackie Morris, lives in a small house by the sea with her son and daughter, two dogs and a pride of feline friends.

Jackie’s regular walks on the coastal path near her home ceased to be solitary as assorted cats decided to accompany her on her forays.

The stunning colour pictures taken by Jackie on her feline attended rambles have resulted in the lavishly illustrated Cat Walk – accompanied by her witty and lyrical observations.

Jackie was born in Birmingham and moved to Evesham with her parents at the age of four. By the time she was six years old she knew she wanted to be an artist.

“I used to get told off at school for drawing and dreaming. Now I get paid to do both.”

Jackie cites ginger cats as her special passion, and the book cover shows Maurice perched on a way sign along the Pembrokeshire coast path.

Although the ginger cats are now mostly ‘ghost cats’ they have been immortalised by Jackie’s camera, along with current additions to the feline fold, two strikingly marked and sinuous Bengal youngsters.

Cat behaviour never ceases to intrigue Jackie, as she says “All cats have attitude, although some keep it hidden.”

The book reveals her cats’ personalities and their idiosyncrasies, as well as their grace, stealth and elegance as they prowl around the countryside.

“This is a charming and amusing book, touching, witty and delightful.  Anyone who likes cats will love it, and those who thought they might be indifferent to the charms of mogs, might find themselves persuaded otherwise.”

Cat Walk has an introduction by Guardian columnist and Under the Paw author, Tom Cox. Tom’s cat, The Bear, now has more than 100,000 Twitter followers.